Its a common misconception that some dogs need a firmer hand.  This bad idea if often suggested when a dog is behaving aggressively to people or other dogs.  All aggression is FEAR! 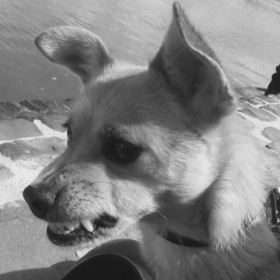 Fear-Based Agonistic behaviors are designed to create distance when a dog is scared and perceives or has learned that escape is not possible.  Leashes, walls, fences & windows can create the illusion of a willfully-naughty or nasty dog.  The aggressive display is the result of fear, imminent danger, the perception of danger, or a history of scary/ painful events in a repeat location.  Warning signs that the dog is afraid are often missed or over-looked and it can appear that the bad behavior escalated quickly.

Aggression is agreeably unacceptable, but trying to solve the problem with force is dangerous and ineffective. Chock, prong and shock collars are definitely inappropriate training tools for aggression. Punishments can make the problem worse and put the handler and other beings in danger.  In order to resolve aggression, the underlying fear must be diagnosed and a addressed.  Fearful animals respond well to gentle methods, a structured training plan and Classical Conditioning.

Despite rampant media attention, Dominance Theory Propaganda that promotes “natural” “alpha” “pack theory” or “calm assertiveness” by scruffing, alpha-rolling, neck-jabbing, biting or imitating animal noises are prepohnderous and completely without scientific evidence.  These methods have terrible side-effects and have not been demonstrated to be effective or scientific.  Do not alpha-roll or challenge your dog for dominance!  Fearful animals respond poorly to force & pain.

Can You Train Away Aggression?

If your dog is on Instagram, please feel free to tag us on a post, or share photos and/or videos of your dog.  You can find us at @FilsonDog_School & @FilsonDogs